Three years ago,  a paper on “The rising of co working spaces- Literature review” was published by Alessandro Gandini where he posed the question – should we be alerted to an emerging ‘co working bubble’, given that co working is being increasingly used for branding, marketing, and business purposes?”

Fast forward three years down the lane, the scenario has changed from the typical routine of taking off from home, getting into your car, arriving at the company office, taking the elevator and sitting at your desk, instead it is all about co working spaces and open offices.

All thanks to the “millennials” being a big driver of this trend !

In this article we take a look at the pros and cons one faces while working in a space that exhibits such character. Working spaces of this manner countered the pejorative views of the traditional office. If we look back to just a few years ago, co working was considered to be a “movement” or a trend, with many believing it would fade away.

Coworking spaces are open offices where all sorts of people can come, grab a seat, and get some work done. In most cases, they work for different organizations, or for themselves, and use these co-shared offices as opportunities, to network, meet new people, explore synergies, or just do their work. Post the global financial crisis faced in 2005, non standard forms of employment were practiced whereby knowledge workers were encouraged in finding new ways to live a nomadic and precarious work life in this fragmented professional context.

At the moment, there are almost 20,000 coworking spaces and the trend seems to indicate this number will continue growing over the next few years, and its most definitely easy to see why.

Firstly, it is the penchant longing of a mind that gets comforted, as coworking spaces makes one feel like they are a part of community consisting of like minded people. At almost every moment, one may experience serendipity as you have the chances to strike up a conversation with a fellow worker, learn something new or have amazing collaborations as well. That’s not a bad deal at all !

Furthermore, they offer a good deal of flexibility and accessibility. Especially for “solopreneurs”, freelancers, or people with small businesses. Coworking spaces can now be found in almost all big cities across the world, each often containing several such hubs. While sometimes they are free, even the paid ones are relatively cheap for what you get. On top of that, their worldwide availability also makes them extremely useful to those who travel a lot.

The most popular co working space platform, at the moment, is WeWork. The company, which started in 2008 in the US, has recently been valued at 45 billion dollars. The company provides its subscribers with health insurance, an internal social network, social events, workshops, and an annual summer retreat. Not bad.

On the other side, the casualization of work has enabled businesses to reduce their costs and space requirements. But the problems it has created for workers are all too familiar: lower take-home pay, and higher levels of insecurity, with all the knock-on impacts this can have on mental health.

Co-working spaces are the spatial expression of the casualization we see in the labour market. In theory, they cater to the “digital nomad”, offering a place and a community as an antidote to the isolation and loneliness of most casual forms of work. In practice, they are not about co-working per se, but about constructing and profiting from a workplace culture that is essentially based on trepidation. And much like their users, co-working spaces are more often than not temporary.

It’s too early to tell whether our perception of what a work space should be like will change drastically because of it. But one thing is clear, people are seeking alternatives to the classic corporate offices that, more often than not, can be seen as creativity- and inspiration-draining places.

Who knows if in some utopian future we won’t completely do away with them, being left with coworking spaces and Google Complex-like work environments. 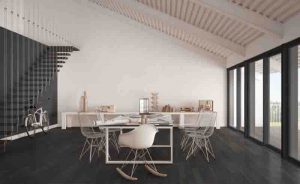